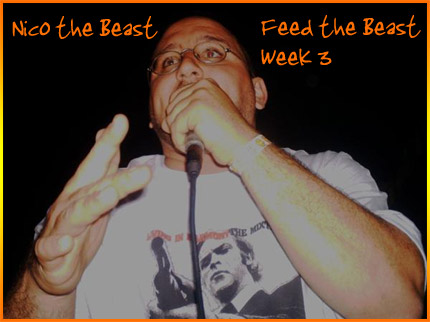 Over the past couple of weeks, we've been giving you a taste of Nico's new album No Beast So Fierce. Zilla describes it as, "Brother Ali meets The Game's 'Documentary' in terms of substance, emotion, and raw raps meets sample-based and more modern production." I'd say that's a fair comparison - or rather, I would say that if I listened to Brother Ali with any frequency. What I can say with confidence is that if you're a fan of either underground rap or the kind of gritty street rap that's become a staple of Philly hip hop, you need this album in your collection. It's now available to buy online, so go cop it!

I happen to have an extra copy of No Beast So Fierce, so I'm going to give it away free to one lucky reader. Contest rules are simple: Just give me the name of your favorite song from a Philly hip hop artist, and if you're the first person to email me (mrjones AT 33jones.com) or leave a comment with a response, the cd is all yours. Simple, right?

And as part of Nico's ongoing efforts to spread the word for his new album, he's completed a third round of his ongoing Feed The Beast promotional series. The first freestyle takes it's inspiration from Raekwon's classic tribute to the 31 flavors of women, Ice Cream. The lyrics stray into NC-17 territory, so you might not want to play this one out at the office if you're in a cubicle:


The second track features Nico dropping some rhymes over the beat from Moleman and Brother Ali's Life Sentence:


Here's the link to purchase the cd: Nico's No Beast So Fierce on CDBaby.