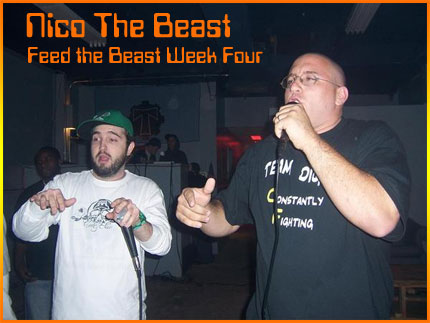 I must admit that I've been more than a little surprised by the level of success Lil Wayne has attained by relying on a vocoder and a notebook full of Vogon-caliber metaphors and similes ("like ranch I dip"). Complaining about Lil Wayne's questionable artistic merits is, at this point, like blogging flogging a dead horse, however, so I won't dwell on that - at least until The Carter III comes out, at which point we may have to revisit the subject.

One of his recent singles, A Millie, is worth discussing though, for two reasons: First, it features Cory Gunz, a rapper I've been a fan of for quite some time now (we featured him back in the day) - a fact that has, admittedly, given me enough reason to listen to the song on more than one occasion. Second, and more significantly, is the fact that this song has continued to get considerable radio play despite the fact that it features one of the worst beats heard on the airwaves since D4L was snapping to monophonic ringtone rap instrumentals. Strip away the looped sample of the dude saying "a millie," and all that's left is a canned handclap, a high hat and the weakest bass line this side of a myspace producer's first demo track. It's the kind of beat that just about anyone could throw together within five minutes of installing FruityLoop. Props to Bangladesh for actually getting paid off of this.

It seems I'm not the only one who considers the beat to be subpar, as Nico the Beast expresses his similar opinion on his latest installment to Feed The Beast, the ongoing promotional effort for his debut album No Beast So Fierce:
Nico the Beast - A Millie freestyle


The second freestyle for this week of Feed The Beast features Nico rapping over what has become the unofficial anthem of mixtapes, a beat rapped over by literally hundreds of emcees at this point, the Cannon instrumental:


Stop by Nico's MySpace page to vote for which freestyle you liked the best. Then head on over to cdbaby and pick up a copy of Nico's debut album, No Beast So Fierce.