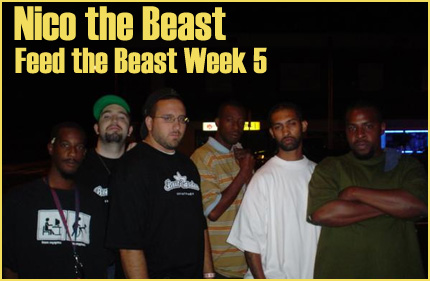 Nico and friends mean mugging for the camera

Adding his name to the growing list of emcees that have come out in support of Barack Obama, Philly's Nico the Beast declares his support for the (terrifying) fist-bumping Democratic presidential candidate in the latest installment of his Feed the Beast promotion for his new album, No Beast So Fierce. My thoughts remain unchanged since the last time we discussed Obama on this site - F.B.P. or not, I don't see much hope for change coming from either party - though the fact that Prodigy's thoughts on the '08 campaign mirror my own admittedly gives me pause.

But that's a tangent for another day, and I suspect his endorsement will be significantly less controversial than last week's Feed the Beast, when Nico dissed the internet's favorite rapper. Getting back to the matter at hand, Nico once again gets on two beats and absolutely destroys them. I really hope all of you out there have been paying attention over the past few weeks, because Nico has emerged as a real problem on the mic. Here's the first track, over Black Rob's Whoa:


In this second freestyle, Nico proudly reveals himself as a fan of American Idol. Who would have guessed?


Did you cop that No Beast So Fierce album yet? It's dope, go get it. Then head on over to Nico's MySpace page, and tell him which of the two freestyles you liked best. And if you're near Philly on June 27th, he'll be performing with Sean Price. I might have to drive down there myself to see that one.