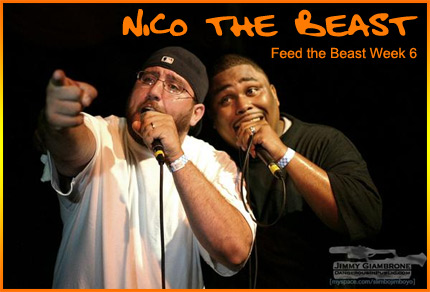 No idea what Big O is doing in this photo, but Nico stays focused regardless.

Want to know the quickest way to get on a (music) blogger's good side? Shout him out in one of your songs. Nico the Beast puts that knowledge to good use on his latest entry for Feed the Beast, the ongoing promotional campaign for his solo debut No Beast So Fierce in which he has been spitting verses over beats selected by the fans, dropping an entire blogroll's worth of names on the track. Nico takes a quick break from the normal format, this time rapping over a beat of his own choosing. Peep:

Nico the Beast - What's Up?


The second song for week six is perhaps my favorite verse yet to come out of the Feed the Beast series. Both the beat (which I can't i.d., but I could swear that's a sample from Deep Cover's soundtrack mixed in there) and the lyrics are significantly darker than any of the previous entries. Some days I can really relate to what Nico has to say on this one:


I know I've begun to repeat myself at this point, but I really am honored to be able to play a small role in the whole Feed the Beast movement. I've always considered Nico to be a dope rapper - since the day Zilla passed along a copy of their first album together - but over the course of the past two months he's evolved into an emcee that actually has me excited to hear what he puts out next. There aren't a whole lot of emcees, signed or unsigned, that I can say that about. Dude really has earned his label as a "Beast."

For those of you who still haven't copped Nico's album No Beast So Fierce, it's now available on amazon.com (and iTunes, though I couldn't figure out a way to link to it directly on Apple's site). You can now buy individual tracks over there, or you can pick up an actual cd over at cdbaby. No excuses, go cop it! And while you're at it, let Nico know which of the songs you liked the best.

Nico's got some great taste in blogs, so in case you didn't catch all of them in the first song, here's a list of the sites that get the Beast's seal of approval: Passion of the Weiss (Wendy William's favorite hip hop blog), floodwatchmusic, nerd litter, 215hiphop, Wake Your Daughter Up and Dart Adams.