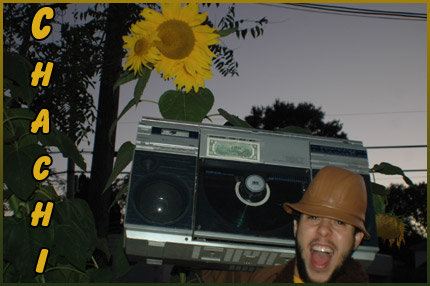 Back in May I ran a feature on one of my boys from college, Charlie Carvalho a.k.a. Chachi. Though we only went to school with each other for two years, he had as much of an impact on me as anyone I ended up meeting while I was in Boston, introducing me to, among other things, Tony Touch mixtapes and my dear friend Olde English 800 (you would not believe how much money can be made selling 40 ouncers to college kids, but that's a story for another day). Over the past month there have been a few major developments in his musical career, so I thought this would be a good time to run an update on him and throw up a couple of his new songs.

He's recently been named as one of the "51 Best MySpace Rappers" by Vibe Magazine in their December issue (the issue with Keyshia Cole naked on the cover). As a follow-up to that, he'll be performing live on BET's 106 and Park on January 30th (6pm, get your tivos ready for that). Soon after that, he'll be releasing his debut album About Time under his own label, Big East Music Entertainment. It blows my mind to think that the kid I knew 10 years ago, who started his career out on a pair of busted Gemini turntables in the hallway of his dorm room, is getting mentioned in Vibe!

I've already said my piece about Chachi, so I'm just going to run the bio from his press kit to get y'all back up to speed:

"Charles "Chachi" Carvalho is a 30 year old Cape Verdean/American emcee born and raised in Pawtucket, Rhode Island. He is an entrepenuer and entertainer who has the ability to capture the hearts of true hip hop fans who are desperately in need of a breath of fresh air. He has made some major moves within the music industry in 2007 and he is just getting started. He has been actively involved in production and performance of original hip hop music for well over 10 years and credits his family and fans for his ability to maintain longevity in an industry that breaks hearts, rules and traditions. He feels that once he is given the opportunity to expand his fanbase nationally and internationally abroad, only then will he be able to operate to his full potential and utilize his God given gifts to spread good vibes throughout a world filled with depressed lives in struggle. He hopes to offer inspiration to creative youth from all over the globe by being a leader, staying persistant and living out his dreams through music. Happiness is his direction and the completion of his official debut album "ABOUT TIME" is his primary focus. The album is being recorded at "BEATBOX STUDIO" and produced by J' Depina and Vertygo."

I've got two new tracks from Chachi for today. The first one, Ohhz and Ahhz, features production by j.DePina and will appear on his upcoming album. I'm putting up the second track, Thug Flutie, because I love the title, a play on the name of Boston College legend Doug Flutie (it's a dope song, too, though):


For more from Chachi, hit up his MySpace page. And if you missed it the first time around, here's the original feature that we did on Chachi. If any of you are from the RI area and looking for a studio, you can book time at Charlie's Beatbox Studio by calling 401-RI-HELP-U.