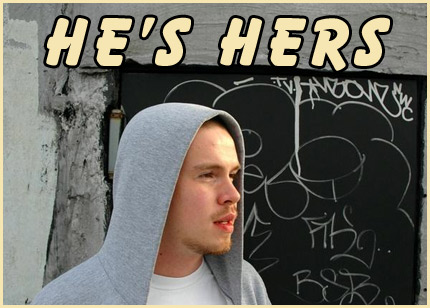 Over the past couple of years, I've become a firm believer in the idea that there is quality hip hop to be found on MySpace. Sure, there's a lot of bad music you have to wade through to get to it, but uncovering the occasional needle in the haystack of social networking sites has reaffirmed my faith in hip hop, a faith that had been shaken by the D4Ls, Souljah Boys and Hotstylz of this world. I didn't always feel that way, admittedly, often overlooking the many demo tapes that made it into my inbox.

My view of unsigned rappers changed the day that Chris Brown, a.k.a. He's Hers ("Her" as in "I Used To Love H.E.R."), emailed me a track that he had been working on. The track, Vanity Press, turned out to be one of the best songs I had heard that year. He sent me a few other tracks that he and his younger brother had produced, and I was blown away by how good they sounded. I hadn't featured any unsigned artists on the site up to that point, but the handful of tracks of his that I listened to convinced me to start putting the spotlight on upcoming acts (a decision that has since exposed me to a lot of great artists). Besides the fact that his music was dope, Chris was living around the way from where I was staying back when I was up at college, so I had to show him some love just for being the only rapper I knew repping Brighton.

Last night Chris sent me the latest track he's been working on. It's an autobiographical song, detailing his life growing up with hip hop, over an ill piano loop. Check it out:

He's Hers - About The Author


Here's one more track of his:


You can read my original post on He's Hers over here (some 33jones trivia: in the original post, I linked to a picture of the other Chris Brown, leading to a server meltdown after Google put it up as the first listing for "Chris Brown"). To hear more of his music, head on over to He's Hers MySpace page.