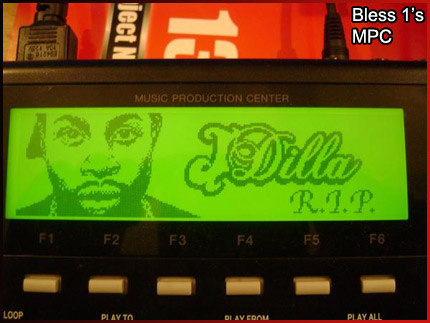 Over the course of the past year, Bless 1 (who, at this point, you should all be familiar with - if not, take a minute to catch up) had been working on a new mixtape featuring his own songs combined with instrumentals and verses from his favorite producers and rappers. It was an interesting concept; Bless has been one of my favorite "rapper slash producers" since the day I first heard him freestyling over an old Dilla beat, so I was curious to see whose songs he'd pick for the tape. From the handful of tracks that he passed along to me, it certainly had the potential to be a great tape. He eventually lost interest in the project, however, instead deciding to focus entirely on creating original music.

I can certainly respect that decision - it's a lot harder to reach your potential as an artist when you're relying on someone else's music - and from the little that he's told me about his future endeavors, it sounds like he's on the path to some groundbreaking work. Yet it's a little disappointing to think that this may be the last time (at least for the near future) that we hear him rapping over a Dilla beat. Dude can rip a Jay Dee instrumental like few others, but the good news is that he's left us with a take on Dilla's The World that is tremendous. Here it is, along with two other tracks that were originally intended for the mixtape:

Bless 1 and J Dilla - The World

The original version of this song was cut from Street's Disciple after Nas was unable to clear the Isley Brother's sample.

Bless is now hard at work on a follow up to his debut album Starving Artist. He's also in the process of putting out a collaborative album with Chris Randall that will be more along the lines of the two electronica singles that he shared with us a couple of weeks ago (you can listen to them here).

To hear more from Bless 1, hit up his MySpace page.