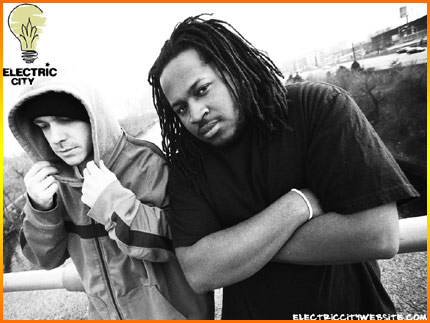 Last week Gramz put me onto a Philly underground duo that he's been working with, Electric City (E.C. being a reference to their hometown). Gramz' taste in music is fairly reliable, with one notable exception, so I gave them a listen. Underground rap groups don't usually interest me that much, but I have to say Electric City is much better than I expected.

The group consists of MC Mighty FlipSide Esq. and DJ Skipmode, with Skipmode's skills on the turntables prominently displayed on the production end of things. That's probably what I like the best from the tracks that I heard; while FlipSide can hold his own as an MC, its the cuts and scratched samples from the dj that had me replaying the songs. Its rare these days to hear scratches on a track in mainstream hip hop, outside of a few songs from DJ Premier and Dilated Peoples, and I wish more groups would involve their djs in the production like this. If I had to describe them to someone who has never heard them before, I would say that Electric City sounds like a cross between Dilated and the Beatnuts.

If you're the type to visit okayplayer on the regular, then its fairly safe to say that you'll be into them. I'm not sure if they will appeal to strictly mainstream hip hop heads, but give them a listen and see for yourself:

You can hear more tracks from their album at the Electric City website. If you don't have flash installed on your computer, you can order their cd here: Everything, Everywhere, All The Time.

And speaking of okayplayer and Philly hip hop, I just came across therootslive.com, which has a bunch of live perfomances from the Roots available for download (I recommend grabbing these). Other than the biennial Jay-Z concert in New York, the Roots put on the best live performances in hip hop. These live recordings don't really do their show justice but if you've never been to one of their concerts, this is the next best thing.