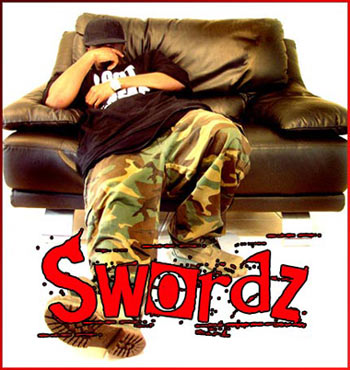 As those of you who have been coming to the site for a while may remember, my brother moved from Jersey down to Jacksonville last year. I have to admit, prior to his moving down there, I couldn't name a single rapper from the area. The closest group I could come up with was the Dead Prez, who hail from Tallahassee. As I started to look into Jacksonville's music scene, one name that I kept coming across was that of Swordz.

Representing Northern Florida's Duval County, 22 year old Swordz uses his lyrics to detail what life is like on the streets of Jacksonville. His portrayal of the city, which often includes tales of drugs and violence, is very different from the Jacksonville that I saw during my brief visits. While I spent my time in the growing commercial area near Alltel Stadium, with its brand new high rise office buildings and hotels, Swordz describes life in the part of the city that has not benefited from the recent urban development.

What makes Swordz different from most other rappers is his live show, which includes a rock band. This may seem like an odd combination, gangsta rap mixed with hardcore rock, but to some extent Swordz is following in the path of another Jacksonville group, Limp Bizkit. Clearly, though, his lyrics and target audience are decidedly less pop-oriented than Limp Bizkit. Explaining his decision to use a rock band for his live performances, Swordz told Ozone Magazine in its October 2006 issue, "If you take rock and rap, it's the same thing. We saying the same thing, same picture, different frame. I wanted to use that energy."

Swordz, working with indie label HoodLife Records, recently put out the single Weatherman. I'm putting that track up, as well as a song he did with Rick Ross, Dope Boi:

Big thanks to Swordz and his management team for letting me use the tracks. If you want to hear more of his music, hit up his myspace page.