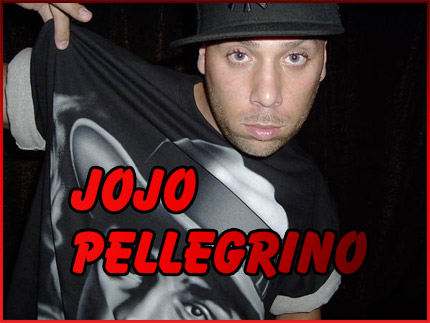 The first time I heard Jojo Pellegrino was on a DJ Clue mixtape from around 2000. He was rapping over the beat for Jay-Z's Where I'm From, flipping Jay's original anthem for Marcy Projects to a South Shore, Staten Island shoutout repping his Italian neighborhood. It was an abrupt change of pace from the two white rappers with the highest profiles at the time, Eminem and Cage. While Em and Cage separated themselves lyrically from the rest of hip hop with their spaced-out, often disturbing lyrics, Jojo embraced street talk in his rhymes, which was more in line with his Staten Island neighbors, Wu-Tang.

It would have been hard to see this as anything other than a parody back in the days of Vanilla Ice and Young Black Teenagers, but by 2000, with the Sopranos just starting to pop off, the idea of a thugged out Italian rapper was a little easier for hip hop fans to accept. Pellegrino came across as fairly authentic in his songs and, from what I can remember, his skin tone never really became an issue. It certainly didn't hurt his street cred, either, when he appeared on tracks with Kool G. Rap and various members of the Wu.

After gaining attention for his mixtape tracks, Pellegrino signed with Chris Lighty and Violator Records. Soon after Jojo joined the label, though, Loud Records (the distributor for Violator) ran into financial problems and closed up shop in 2002, leaving Jojo without an outlet for his completed LP. After his Violator deal fell through, he began releasing "street albums" (a.k.a. mixtapes) independently. Now four years later, it looks like we might actually hear an official Jojo Pellegrino album, as he recently found financial support to form his own record label, "Pellegrino Records."

In advance of a full length album, Pellegrino released Pellafreestyles Vol. 1 last week, a collection of 28 freestyles. It's been a couple of years since I had heard anything from Pellegrino, but after listening to this tape its clear he's still on top of his game. Definitely worth picking up if you can find it. Here are a couple of tracks from the tape:

Check out his myspace page and his official site for more tracks.