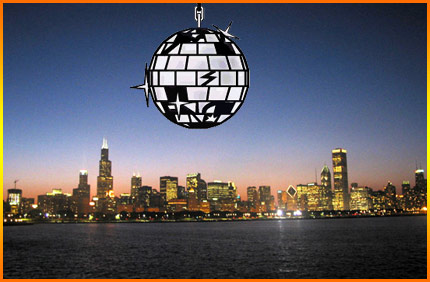 In the summer music issue of The Fader, there's an article about Chicago's Juke music scene. After reading one of the djs quoted in the article as saying that he believes juke music can pick up where Snap music left off, I initially had my doubts as to whether or not this was something I would be into. Not being a big fan of Snap music, that seemed like a backhanded compliment to me.

After reading the full article, though, it became clear that Juke music is a lot closer to House music than Snap (its often referred to as "ghetto house"), and that's certainly not a bad thing. These days, House music and its electronic offspring are likely to conjure up images of kids convulsing around on the dance floor with glow-sticks and lollipops, but don't get it twisted; House music started in the clubs of Chicago and its original fans were a lot more "hip hop" than what you see now. Like House, Juke originated in the clubs of Chicago but has yet to gain much of an audience outside of the Windy City.

I'll admit I'm not a big enough fan of House to listen to it every day, but I have had an appreciation of it ever since the Jungle Brothers dropped I'll House You. I was curious to hear what House music had evolved into more than 15 years later.

To supplement the Fader article, I looked up "juke music" in the UrbanDictionary. One of the definitions from the site: "A dance commonly done in Chicago where a female rubs her azz on the males dick." No doubt, that sounded like something I could get into so I next looked for an authority on juke music to help me out.

The first person I contacted was DJ Nehpets (before anyone nitpicks, the Fader article mispelled his name, not me -- "Nehpets" is how he spells it himself). I asked Nehpets what his recommendation would be for someone who listened to hip hop but hadn't heard any juke tracks before. Nehpets was kind enough to pass along two tracks to put up. The first one is a juke remix of Shawnna's Gettin' Some by Nehpets. The second track is Lil Wish's Pop Drop:

As you'll notice immediately, the beats on these tracks are a lot faster than traditional hip hop. Like House music, Juke is "four on the floor," with a kick drum on every beat. 120BPM seems to be the bare minimum, with the beats going as high as 150BPM and beyond. What is most appealing about the juke remixes is the fact that they don't waste time with the weaker parts of the songs they are sampling. For example, I don't have much interest in hearing Shawnna's rudimentary rhymes on Gettin' Some, but the Nehpets remix takes the hook (I was gettin' some...) and loops it into a club banger. Juke won't appeal to every hip hop fan, and if you're searching for intricate rhymes you'll probably want to look elsewhere, but there's no question that it is perfect for clubs. If the genre finds the right promoter (and Nehpets may be that person), it would not surprise me to see Juke blow up like Miami Bass did after Luther Campbell and 2 Live Crew dropped Me So Horny.

Once again, big shouts to DJ Nehpets for coming through with the tracks. Much appreciated. Go hit him up on myspace and let him know what you think of his music. If you're in the Chicago area, you can catch him on Power 92. You can also pick up a vinyl copy of a few of his singles here.