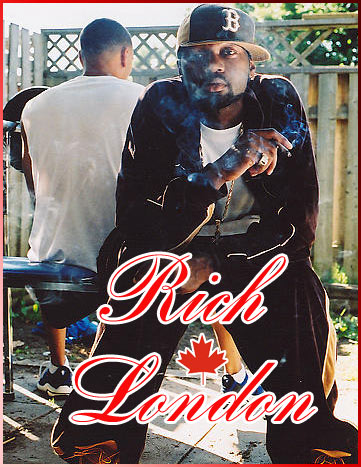 Its been almost a year since I've put up any tracks from north of the border, so this one's for all of my Canadian readers. Braap!

Last week I picked up a couple of mixtapes from Rich London, hailing from the Scarborough section of Toronto. Most of my exposure to the Canadian hip hop scene has come from kids rapping about snitches in heavy Jamaican accents and whatever SpliffHuxtable puts up, so I listened to these Rich London mixtapes not expecting much and ended up being surprised by how good this dude was on the mic. It was interesting to hear how similar he sounded to American rappers -- including, unfortunately, lyrics scattered with the gun and drug talk that has become so prevelent in American rap. The quality of his flow and the production behind his songs make it a lot easier for me to overlook that, though (and for all I know, maybe it really is that serious up in Toronto). Its rare that I say this about a mixtape rapper that I've never heard of before, but I am looking forward to his official album release. Check out some of his songs:

You can download his latest mixtape, The Movement, for free at Rich London's official site. Direct link to mixtape zip file.

For more info, hit up his MySpace page. His debut album, Born Date, is scheduled for release this spring. Big thanks to Rich London and his manager Farai for letting me put up the tracks.