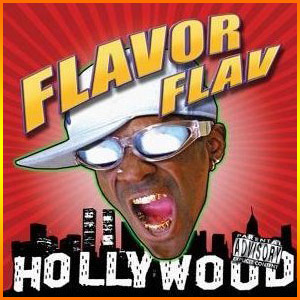 If you were to put together a list of the top rap groups of all time, Public Enemy would undoubtedly be up at the top of the list. They combined some of the best production hip hop has ever seen, courtesy of Hank Shocklee and the Bomb Squad, with politically relevant lyrics delivered by front man Chuck D. What helped P.E. become more than just a political act, though, was hypeman Flavor Flav, who often served as a needed break from the heavy subject matter that Chuck D. focused on. Though thousands of other hip hop records have come and gone, the one album that I have always kept in my collection, from bootleg cassette to cd to mp3, has been Public Enemy's It Takes a Nation of Millions To Hold Us Back, and Flav was a significant part of the album's success.

It has been with more than a little regret that I have watched Flav's transformation from a vital member of Public Enemy to the representation of everything that is wrong with hip hop today. From his descent into drug addiction during the latter days of Public Enemy to his regrettable appearances on VH1's Surreal Life and Flavor Of Love(s), Flav seems to have turned his back on everything that Public Enemy once stood for. On the rare occasions that Flav was given the spotlight with Public Enemy, with songs like 911 Is a Joke, he did manage to send an important message while still conveying some humor in his lyrics. Yet with his newly developed persona as Reality TV Star, any politically relevant messages he may have once had for his audience seems to have been lost. With the release date of his album the same day as Kevin Federline's, is it possible that Flavor Flav managed to put out the worst hip hop album of the week? Let's find out:

Let It Show:
Flav sings completely out of tune and off beat to what sounds like the theme music from Leisure Suit Larry. Midway through, Flavor Flav gives up on the singing and starts throwing out random shout outs to people I've never heard of before. I'm already having second thoughts about doing this review.

Flavor-Man:
The beat on this track sounds like an old Bomb Squad beat, with some Just Blaze-esque drums thrown in for good measure. Flav manages to fill 48 bars without ever actually saying anything in his lyrics. This song would actually be decent if not for the atrocious hook, "Flavor flavor flavor flavor man."

Unga Bunga Bunga:
You know this song is going to be on some ignorant ish just from the title. And in case you didn't know what the title was, Flav repeats the phrase "Unga Bunga Bunga, G!" several times throughout. I can actually feel my I.Q. getting lower while I listen to this.

Two Wrongs:
A beat that sounds like something even Jodeci would have passed on back in the 90's + Flav singing off key about his relationship problems = me hitting the fast forward button.

I Ain't Scared:
Flavor Flav tells us that he is a much better father than people give him credit for, with the sole evidence presented being the fact that he brought his kids to Public Enemy concerts back in the day, and then proceeds to call out the mother of his children for being greedy. Good thing he's now looking for his true love on a reality tv show, there's no chance he'll meet any greedy women that way.

Baby Baby Baby:
This one isn't so much an actual song as an instrumental with a few voice overs from Flav. The beat itself takes one of the generic drum beats that comes built in with casio keyboards and throws in a sample from some classical music. Next.

Wonder Why:
"Why don't we ever hear from Flavor no more?" is the question that this song poses to the listener. The answer: Because you're a gold digger.

Interlude: Latasha Break:
Flav and (what I assume is) his infant daughter speak to each other in baby talk. The best I can say about this interlude is that its about as intelligent as anything else you'll hear on this album.

No Loot:
Here Flav tells us in the chorus that girls who "ain't got no loot" can't hang with him. This is yet another song that has Flavor Flav lamenting the fact that the women he meets are gold diggers. Damn, Hoopz really burned this dude.

The Jookz:
This song is the closest you'll get to Flav rapping in any conventional sense of the word. Instead of the usual pattern of every three words rhyming Dr. Seuss-style that is prevalent throughout the rest of the album, Flav actually breaks things down into five or six-word lines here. The lyrics themselves make no sense, but I at least got the sense that Flav didn't ad lib the entire song off the top of his head. I really can't say that about any other song on this album.

For The Rest Of My Life:
More singing from Flavor Flav. If you've ever been to a karaoke bar and gotten stuck listening to the guy who's had one too many drinks stumble his way through a love ballad then you've already experienced For the Rest Of My Life.

Hot 1:
The beat here contains samples from the classic Public Enemy track, Bring Tha Noise. Whoever produced this song managed to take a great P.E. instrumental and turn it into one bad track.

Platinum:
Flav proclaims that he is "going triple platinum." I'll tell you what, if this album manages to go platinum, I may give up on hip hop entirely.

Guess Whooz Back:
In case you missed his starring roles in four consecutive VH1 reality television shows, Flav's here to tell you that he's back on the scene. He raps about some of the problems he's had in his personal life since he stopped touring with Public Enemy, including a stint in jail. If he had the ability to put together a coherent rhyme this song could have been interesting just for the revelations about his personal life, but Flav's lyrical shortcomings prevent him from telling even the simplest of stories. For some reason the hook has a girl singing, "Scooby Dooby Doo."

Get Up On The Dance Floor:
This is the requisite "club banger" for the album. This beat uses the same bass line as the remix for Dru Hill's How Deep Is Your Love (I'm not sure why I remember any of Dru Hill's songs or even why I'm willing to admit it). Flav's lyrics here don't go much further beyond, "Get up on the dance floor! Yeah!"

Bridge Of Pain:
Flavor Flav tells us this song goes out to everyone stuck in the "penile" system. That Freudian slip was the only thing memorable about this track, in which Flav details the time he spent in prison.

One and Only Original Flavor Flav:
The song opens up with Flav telling us, "This beat is rocking, yo!" And I have to admit, he might be right. The beat doesn't make up for Flav's lyrics, though.

Col-Leepin:
This is a sequel of sorts to the classic Cold Lampin' with Flavor, and Flav uses more or less the same flow as he did 18 years ago on It Takes a Nation Of Millions.... Halfway through the song, the break beat from 99 Problems pops up. Flav has made it clear that he has 99 problems, and a bitch is most definitely one of them.

Bonus Track featuring Smooth B.:
Ok, I'll admit I was actually looking forward to this track. I haven't heard from Smooth B. in a minute (though his partner in crime Greg Nice is still keeping busy). Unfortunately, the VH1 Media Player kept playing Baby Baby Baby whenever I clicked on this track, so I have no idea what it sounds like.

Hotter Than Ice:
This being the last track, I was afraid I might not get the chance to hear Flav sing again. Luckily, Flav brings it one more time, singing in what can only be described as a country song gone horribly wrong. Honestly, I don't know if he had any left after the Surreal Life and Flavor Of Love, but whatever remained of Flavor Flav's dignity was lost after this song.

Final Verdict: You can safely pass on this one. While the production on Kevin Federline's album occasionally overcame his lyrical disabilities, the same cannot be said for Flavor Flav's self-titled album. The only positive thing I can say about Flav's lyrics is that they are so bad that we can safely assume he did not use a ghostwriter.

When I originally saw the track list for this album, I was disappointed (but not surprised) that Chuck D. did not put in a guest appearance. Having listened to the album, though, I'm relieved that he was not involved with this train wreck. With the release of this album, Flavor Flav has destroyed any credibility he may still have held from his prior involvement with Public Enemy. And that's a damn shame.

Flavor Flav's Flavor Flav was released yesterday, October 31st, 2006. You can listen to the album on VH1.com.