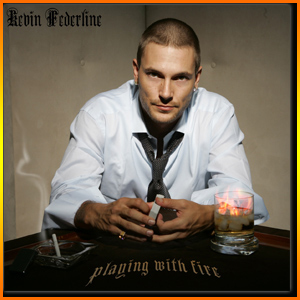 Before I get into the review of Kevin Federline's Playing With Fire, let me just say that I went into this not expecting much out of K-Fed as an MC. I don't want to ruin the surprise for any of you, but Kevin (or, more accurately, his ghostwriters) comes with lyrics that are filled with nothing but a bunch of played out hip hop cliches. The only question that remained for me was whether Britney Spears' bank account was big enough to buy enough quality beats to make this album even remotely interesting. The answer, with a few exceptions, is "no." Let's break it down track-by-track:

World Is Mine:
K-Fed raps about being a modern day pirate over a beat that features some kettle drums in the background that give the whole thing a Caribbean flavor. The beat then segues into a faster-tempo keyboard loop, with Kevin dropping the pirate metaphors and making the claim that Young Jeezy told him "The World Is Mine."

America's Most Hated:
Kev opens up this track by telling us that his reputation "is fully automatic like an AR" and that he's "committed to the game" over a piano sample. The beat on this song would have actually fit right in with Jay-Z's Black Album, but instead of S.Carter we have K-Fed telling us how he's balling out. If he were better known, its quite possible that Kevin would actually live up to the title of this song.

Snap:
For whatever reason, this track wouldn't play for me. I'll assume its another track with Kevin bragging about how rich Britney he is.

Lose Control:
You've probably seen the video for this song, with K-Fed sitting in a darkened club spitting out the unforgettable hook, "This is that Hip Hop Flava mixed with a little bit of Rock and Roll." The beat, which would actually work quite well in the hands of a more accomplished rapper, features some more piano work as well as a handclap loop. This song reaches a low point midway through when the beat drops out and we get to hear Kevin kick a few lines acapella.

Dance with a Pimp (featuring Ya Boy):
The beat on this track has one of those Indian flutes playing in the background (remember when that was hot, back in like 2001?), with Ya Boy handling the hook and adding a verse of his own. This song would have been more interesting if Rakim and Truth Hurts were brought in for a guest appearance instead of Ya Boy. Kevin tells us that he added "30 G's to his dentures like a real pimp do."

Privilege (featuring Bosco):
In the write up for this track, Federline describes it as "probably my strongest record," so I had relatively high hopes for this one. These hopes were quickly dashed when this ode to Hennessy started out with Bosco doing his best Nate Dogg impression over what sounded like an old G-Funk beat, singing, "Let's get something to smoke, and pour me a glass of Privilege to get my throat wet." The most memorable part of this track is when Kevin drops the line, "I'm rich, but my hustle is like a broke nigga's." AOL actually bleeped out the "N word," so its possible he used some other turn of phrase, but I doubt it. If anyone else is actually paying attention to his lyrics, I expect there will be some controversy over this in the near future.

Crazy (featuring Britney Spears):
This track has the best production work on the entire album, which isn't all that surprising considering this is the one song that features Britney Spears. Since she financed this whole project, you better believe she's going to get her money's worth on the song she appears on. Britney herself doesn't do much more than sing the hook, in which she says that "Most people think I'm crazy for loving you."

League of My Own:
Here, Kevin describes to us how he's going to take over the music industry. He'll go so far as to "put a bullet through your vest," if that's what it takes. He's going to need a better ghostwriter than the one he used on this track to do it, though.

Playing with Fire:
The beat on the title track is pretty good, with some synths and a flute in the background. "Playing with Fire" is apparently a metaphor for trying to compete with the awesomeness that is Kevin Federline.

Caught Up Intro:
The audio on this one was pretty bad, but it sounded like a recorded phone conversation between Kevin and one of his friends. Kevin kept laughing in response to whatever the guy on the other line was saying, but I can't say that I laughed at any point during this skit.

Caught Up:
Another solid beat on this track, its got one of those sped-up soul samples that Alchemist and Kanye West like to use. This is probably my favorite track on the album (I use the word "favorite" rather generously here), and the beat is almost good enough for me to ignore Kevin's rapping.

Kept On Talkin:
Its the last track on the album, and I was actually getting excited about this thing finally coming to an end. Then I saw the time for this track was over 10 minutes. Damn. The beat here is on a bootleg Timbaland vibe, with some futuristic sounds in the background. Kevin makes the claim that he doesn't have to carry a gun because "he's got people that will shoot at you." At about the 4 minute mark, the song ends and there is silence for about a minute. But wait y'all, it ain't over yet! A new beat kicks in, this time with a Crunk beat that stays with the futuristic sound effects in the background. Kevin leaves us with the message, "Put your middle fingers up if you really don't give a..." The End.

Final verdict: Not worth buying. Let's be honest, if you are a real hip hop head, you were never considering buying this album anyway. If you're into the most cliched kind of pop rap, or if you've been a fan of K-Fed's since his days as a background dancer for Britney, then you might be into this. The beats aren't all bad, and they occasionally overcome Kevin's best efforts to ruin the song, but there's no way I would listen to this thing a second time through voluntarily. Ultimately, this cd reveals Kevin for what he is: an imposter trying to buy his way into hip hop.

You can listen to a streaming version of Kevin Federline's album at AOL. Click here to listen. The album will be released on October 31st, 2006.