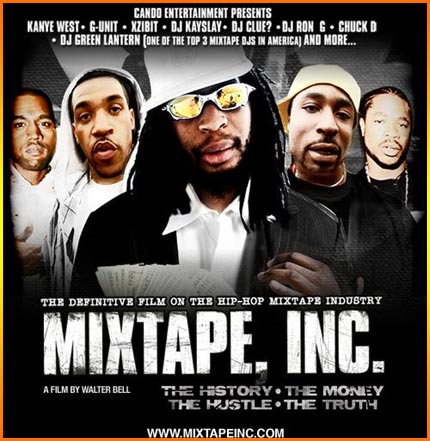 When I first heard about Mixtape, Inc, the documentary was being promoted as an exposT on the hip hop mixtape scene that centered around a high profile arrest. The DVD was being released at the end of May, just two months after DJ Drama's studio was raided by an RIAA-sponsored SWAT team, so I assumed this was a reference to his arrest. Since my local Blockbuster didn't have any plans to stock the dvd, I told the promoters behind Mixtape, Inc that I would put up a review if I could get a free copy. It took me a couple of weeks to get around to it, but here is my impression of the movie:

As it turns out, Walter Bell's Mixtape, Inc has nothing to do with DJ Drama. The "high profile arrest" that the promos for the DVD allude to is the 2003 arrest of Indianapolis record store owner Alan Berry. It would seem to be an odd decision to release a documentary on mixtapes in 2007 and not make any reference to Drama. As it is, the majority of the footage in here is a few years old as most of the filming was completed in time for its originally scheduled release date of 2004.

If you're able to get past the fact that this documentary isn't quite up-to-date, there's some interesting stuff to be seen here. The narrative primarily focuses on Alan Berry, with a series of interviews done in the weeks after his two record stores were shut down by the RIAA and the local police for selling mixtape cds. Berry raises some good points about the record labels' complicity in the mixtape game, though the interviews themselves are a bit odd. On the advice of his attorney, Berry does not look into the camera at any point during the movie. The end result is that you'll spend more time trying to figure out why he's constantly dodging the camera than listening to what he's saying during the interviews (I've since contacted a couple of lawyers to ask them about this, and neither of them could come up with an explanation).

In contrast to Alan Berry, Ty Boogie was far from camera shy, as his interview is done in extreme-closeup mode with the camera about two inches from his face, which I presume is due to the fact that it was filmed in the close quarters of his Harlem apartment. Though the movie never really makes a point of focusing on it, for me Mixtape, Inc's most significant statement on the mixtape industry is made through the comparison of Ty Boogie and Alan Berry.

At the time of the filming, Alan Berry seems to be doing quite well for himself, conducting the interviews in his brand new Audi TT and in his suburban record stores. Ty Boogie, on the other hand, is living in the projects with his mixing studio jammed into the corner of his small bedroom. Yet Ty has plaques on his walls from various record labels, thanking him for his help in supporting their artists, while the only thing Berry gets from the RIAA is a court order stapled to the door of his record store. The message seems clear: the record labels will support you as long as they can use you as a promotional tool in the 'hood, but the minute you start making some money and bring mixtapes to the suburbs they'll send out the lawyers.

Berry and Ty Boogie aren't the only two mixtape "insiders" on Mixtape, Inc, though. A young Sickamore, before he became a blogger/A&R, gets a few minutes of screen time, though he doesn't do much beyond promoting the Sickamore brand name. Mike Love conducts his interview in the champagne room of a strip club, a blunt-smoking Curt Nice gives several amusing sound bites while selling mixtapes out of the basement of his grandmother's house, Kay Slay modestly tells us how he's gone from jacking kids for their spray paint cans to running the mixtape game, and Def Jam's VP of Rap Promotions Rob Love spends his time on camera telling us how much mixtapes help his artists while at the same time expressing his support for legal action against the mixtape industry. The interviews are all over the place, but for the most part they'll keep you entertained.

The most absurd moment of the movie comes courtesy of Kanye West, flanked on a white leather couch by GLC and Consequence, with him answering his cell phone several times during the interview as if to emphasize just how important he is. Kanye says that he hates mixtapes because they force artists to rush to get their album done before any of the tracks get leaked onto mixtapes and become available for free. That's a valid point, but Kanye doesn't end there. He goes on to spit an awful verse acapella and proclaims that the lyrics he writes are just too good to be given away for free (having released his own mixtape just a few weeks ago, we can assume that his opinion has since changed). He is dead serious when he says this, despite the fact that he is sitting just inches away from two rappers who in all likelihood have ghostwritten a fair amount of his rhymes.

For me, the best part of Mixtape, Inc comes early in the film, with an interview from Red Alert. Red breaks down the origins of the hip hop mixtape, dropping several little tidbits that I hadn't been aware of, such as the fact that Brucie B. was the first DJ to put a shoutout on one of his tapes. So the next time you hear Whoo Kid ruin a track by talking over it, you know who to blame. Unfortunately, this is the shortest segment of the movie and we quickly jump from the early 80's to 2004.

In the end, if you're at all interested in the mixtape scene, Mixtape, Inc is worth checking out. I don't know if I can recommend that you drop $20 to buy the dvd, but it's certainly worth adding to your Netflix queue.

To see trailers from the movie, stop by the film's MySpace page.