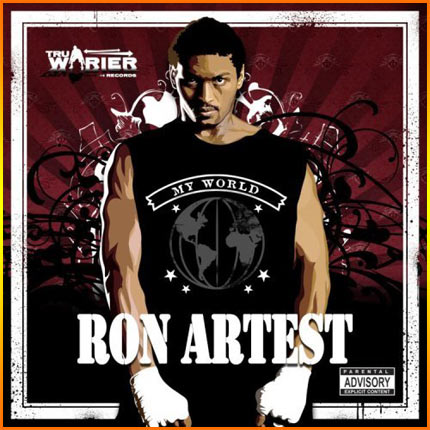 Though this site has been around for about 4 years now, when we rebooted the whole thing in the summer of '05 one of the first posts that any of the major sites (specifically, the now defunct Screenhead) picked up on was a small piece I wrote about Ron Artest. Because of that, and the fact that he's one of the most gifted yet emotionally unstable players in the NBA, he's become one of my favorite players to watch. When news broke yesterday that his debut album, My World, sold only one copy, I was a bit surprised. I knew, of course, that any rap album featuring a professional athlete was doomed from the start, but one unit sold seemed unbelievable. With all of the family members that are undoubtedly leeching off of his NBA salary, none of them could go out and buy a few copies just to support Ron? Though I have a feeling that this will turn out to be an error on Soundscan's part, I had to listen for myself and see if this album was truly that bad:

Intro featuring Diddy:
Diddy explains what it takes to be a "Tru Warrier." Though he doesn't get around to mentioning it, its clear from glancing at the tracklisting that spelling is not a requirement.

Haterz:
Ron Ron doesn't understand why "all these cats keep hatin'" him. The beat sounds like something Snoop was using post-Death Row, before he and Dr. Dre patched things up. Most of the lyrics address the people who criticized Artest for being a part of the brawl at Auburn Palace. Some great lines on this one, including: "Matt Lauer, you look like a girl, don't talk to me."

Bad Karma:
A love song of sorts that he dedicates to his one and only boo. Rapping over what sounds like a Joe beat from 2000, Ron tells us that he has two girls in his life: one that he keeps just to fool around with and a project girl that is his true love. At one point in the song, Artest starts rapping in character as the two girls that he is hooking up with, even changing his voice to sound like the women. Though I don't think he actually intended it to be funny, I got a good laugh out of it.

Cash Money featuring Juvenile:
A collaboration with Juvenile (though since Juvenile is currently at odds with the label Cash Money, the title of this song doesn't really make much sense), Ron makes a lot of sports metaphors on this one. He tells us that when he "nuts quick and then jets out the door" its just like shooting a brick at the free throw line. I can't say I fully understand the meaning behind that analogy, but before I can really stop and think about it, Juve drops a verse about "big titty women," and my mind wanders on to other thoughts.

Nasty North:
This song opens up with a vocal sample of a woman moaning, then in kicks a beat that sounds like something from an old Cash Money album. Over the beat Ron tells us we need to rep our hoods, whether we're from the Nasty North or the Dirty South (Nasty North, Stand up!). Ron changes up his style for this one, using the same word on each line to rhyme with itself: "Uh oh, Uh oh, Yo Its trouble, trouble, money on the double, double, Watch them guns blow, guns blow."

Workin' The Pole featuring Big Kap:
This one's for the scrippas. Big Kap handles the hook with his signature highbrow style, shouting, "Drop yo ass to the flo'." As with previous albums that I've reviewed (Jim Jones, K-Fed), I'm once again amazed that someone can put a love song devoted to their wifey on one track and follow it up with an ode to strippers, without a trace of irony.

Fever:
This is the first (and most likely, only) single off of the album, and it probably is the best track to be found here. The song uses the same sample that Mark Ronson used on Ooh Wee, though with less success. Things are going ok for Ron, lyrically, until he starts singing the Oochie Wally hook and I suddenly realize just how corny this song is.

Hood Luhv:
Apparently not enough "Luhv" in the hood for more than one person to go out and buy the album, but that's neither here nor there. Ron tells us about his first sexual experience on this track, romantically describing the encounter with the lyrics, "Hump the booty booty, Hump the booty booty." Ron then admonishes all the Baby Mommas and Baby Daddys in the house to drink moderately, because they've got kids asleep upstairs. I don't think the clubs are ready for a message like that.

Skit:
A bizarre skit, wherein Ron Artest does the voices of various U.N. representatives. For some reason, when he does the voice for North Korea, he impersonates Yoda. He then tells us that he, Ron Artest, represents the nation of "Musica." If this dude ever needs to plead insanity at any point in his life, you can go ahead and label this skit "Exhibit A."

No Good:
Ron laments the state of the world today, with millions of teens dying through violence and suicide. The song is bad, but you know what? The message here is actually pretty good, so I can't hate on that. Ron doesn't offer any actual solutions to the problems he discusses, but he at least seems to be sincere in his concern for the world's problems.

Coroner:
Here, Ron raps about a friend of his who recently died. Though Artest has clearly been affected by the death of his friend, he lacks the lyrical ability to make the listener appreciate the emotional impact of his passing.

Skit II:
You know how Eminem always has those skits with Paul Rosenberg, his executive producer, arguing about the controversial songs that are on his album? Well, this is kind of like that, but without any of the humor.

Rap Game:
This song makes several references to being "Crunk," but the beat uses a sample of an organ playing some sort of medieval music. Not exactly what comes to mind when I think of crunk music. Ron tells us he is the "greatest, hoodest rapper in the industry."

Why:
Quick, think of the worst Nate Dogg song you've heard. Got it? Ok, now you know what Why sounds like.

La La Ladies:
We open up this song with someone speaking Spanish. I initially feared this would be a reggaeton track, but to be fair it never gets quite that bad. Ron tells the ladies he wants "to be like Mel Gibson, I want to know your thoughts." With all of the trouble Mel has gotten himself into lately, surely Ron could have come up with a better reference than What Women Want.

Get Low featuring Mike Jones, Nature and Capone:
Mike Jones opens the track up with his signature, "Mike Jooones." I would normally be annoyed by that, but Queensbridge's own Nature soon pops up on the track and all is forgiven. I haven't heard anything from Nature in a minute. Though his verse only lasts about 30 seconds, its good to hear him rapping on an album, even a Ron Artest album. The Capone and Mike Jones verses are entirely forgettable.

Hush:
This song has a piano sample that would sound right at home on a Mobb Deep or Big Noyd album. Ron Artest reps Queensbridge a lot throughout the album (and he is from the Queensbridge projects), but this is one of the few tracks that actually has an identifiably "QB" sound to it. This album would have been a lot more interesting if he stuck with this type of production.

I Like My Song featuring Nature:
The hook on this song has Ron singing, "I don't care if you like my song," the way 1st graders do that sing-songy "Nyah nah nah nyah nah." I don't really know how else to describe it, but it sounds ridiculous. Almost as ridiculous as Ron's claim that he's "Top 10, Rapping or Ballin'." Once again, though, Nature shows up and makes the song mildly interesting.

Everywhere I Go featuring Boney Soprano:
Artest touches on some of the problems he faced during his life, a life in which he grew up in the projects and made it all the way to the NBA. Artest certainly has led an interesting life up to this point and it would have made for some good material on the album, but he never really examines it. Instead, he wastes most of the album calling out "Haterz" and telling us what a p.i.m.p. he is.

No Easy:
Ron sings the hook on this one, completely off key. Nothing really stands out about this track, except for the line: "Racism? Nah, you can be a Mexican." As with many of the lyrics on the album, I don't really get the meaning behind it, but I am somewhat amused by it.

Final Verdict: There's a reason only one copy of the album was sold its first week it. Though Ron certainly isn't the worst NBA player to grab a mic (Kobe Bryant, I see you), that doesn't mean he should be putting out a rap album, either. There aren't any truly awful songs on this album, but there also aren't any tracks that I would want to hear a second time through. It was nice to hear Nature on a few tracks, but it wasn't enough to save this album. Since Artest does go out of his way to represent his Queensbridge roots, it would have been interesting if he had gotten more QB guest appearances, like Nas and Mobb Deep, and if the production on the album had more of a New York feel to it. Ron Artest is an interesting character, both on and off the court, and he could have used this album as an opportunity to tell us more about the experiences that have made him who he is. Instead, we're left with Ron Artest lashing out against imaginary adversaries and bragging about his high roller lifestyle over beats that would barely make the cut for a Kay Slay mixtape.

Ron Artest's My World was released on October 31, 2006 by Lightyear Entertainment. You can listen to the album on Rhapsody here.